Over the years the biological control was extended to codling moths and plum fruit moths, as well as to various pests in the greenhouse growing of vegetables or ornamental plants and in the meantime to lepidopteran pests in tropical greenhouses. About 15 years ago, the use of Trichogramma in the stored products protection was developed together with a partner.

Target pests for Trichogramma are the Indian meal moth (food moth), the common clothes moth and the casemaking clothes moth that can be effectively controlled by the use of beneficial insects. Regularly new damaging moths occur. We test the possibility to control them by Trichogramma and develop appropriate control concepts.

The only 0.3 to 0.4 mm small Trichogramma parasitic wasps are natural antagonists of numerous lepidopteran pests. The tiny hymenopterans parasitize pest eggs, that means, they occupy them with their own eggs. The pest egg is eaten up while a little beneficial insect develops inside. After about 10 days, a young parasitic wasp hatches from the killed moth egg and looks for further moth eggs.

The cycle repeats as long as there remain pest eggs. Naturally occurring populations are not sufficient for a successful control. A seasonal settlement is also only possible in a few cases. Therefore, the beneficial insects are bred en masse and targetedly released every year during the oviposition of the target pest.

The Trichogramma parasitic wasps may also be used against pests like

TrichoKarte and TrichoKugel have proven to be optimal application systems. They contain parasitic wasps in up to 10 different stages of life, in order to hatch in a period of two to three weeks depending on species and target pest. 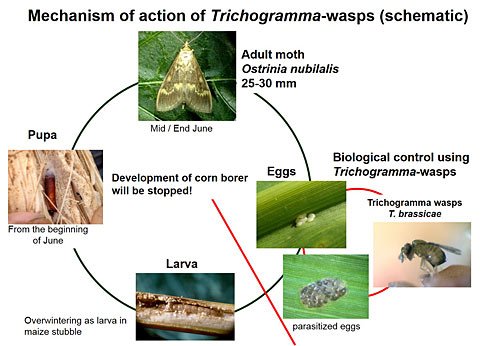 The team of AMW has many years of experience in the breeding of Trichogramma. Through the own development of new mass breeding systems and mechanical manufacturing techniques, today we are able to supply large quantities within a very short time.

Besides the mass breeding, in our laboratories we maintain a collection of more than 200 strains of 30 different Trichogramma species that amongst others come from outdoors baiting and collected pest eggs. Interesting breeding lines are checked by us in extensive laboratory tests and field trials in terms of their appropriateness for the control of damaging moths. In this way suitable antagonists of cabbage moth, codling moth etc. could already be determined.

For the quality control of Trichogramma, criteria like number, lifetime, number of offspring, host acceptance and host preference are evaluated.
The morphological determination of the only 0.4 mm small Trichogramma parasitic wasps that are used against damaging moths in plants and also in the stored product protection is very difficult, because a preparation of the male genital apparatus must be carried out for it.
Due to species-specific host and habitat preferences of the individual Trichogramma species and the related suitability to control a specific pest, the taxonomic determination of the Trichogramma is indispensable.

The beautiful pictures and movies of Trichogramma are the result of a cooperation of Mister Prof. Urs Wyss, University of Kiel and Bernd Wührer for the short movie on the Biology of Trichogramma parasitic wasps.